It's certainly not Jack's favourite activity, but luckily he doesn't have to put up with it too often. There's no avoiding it: four times a year this golden retriever has to have a shower. But it's not only Jack who gets a shower; his master, Mitchell, usually ends up soaking wet too!

Jack lives up to all the clichés about Golden Retrievers - he is super-friendly and he's thrilled to be part of Mitchell's family. At the weekend, he loves nothing more than playing with the kids in their beautiful,  large, poplar-shaded  garden. But that does mean that he needs a good wash now and again. Not too often, though - four times a year is plenty.

Today is the day…

First of all, I brush Jack to remove dead hair and tangles. Then it's time for him to go into our walk-in shower. There's a non-slip mat on the ground. I wet his coat with gentle, tepid water, from a distance of around 1cm. I work my way along his body starting at his tail-end, taking extra care around his ears, eyes and nose." 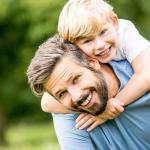 "Four times a year, we give our Golden Retriever a thorough wash. It's important not to do it more often than that or you risk stripping away their natural protective oils."
Mitchell
... then a nice bath

"Next, it's time to work up a good lather using dog shampoo. Again, work from the tail towards the head, massaging into the coat. Then I rinse well, working my way back towards his tail, making sure all the shampoo is removed." Once he's been washed, Jack can put on his bathrobe so that he dries nice and quickly. And - for that special finishing touch - I use a bit of dog perfume to make him smell really lovely after his refreshing bath!