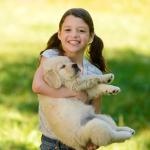 It’s completely down to Sarah that little Nouchka the Golden Retriever was house-trained so quickly. She trained the puppy for two to three weeks, with a secret aid in reserve.

Sarah was as excited as her birthday present herself when she first set eyes on her young Golden Retriever Nouchka. Even though she knew what to expect, because this was no mere impulse on the part of her parents.

Mum and dad, along with their daughter, first thought long and hard about what sort of dog they should bring into the house. But unsurprisingly, they soon opted for a Golden Retriever. “They aren’t just patient, friendly dogs”, mum explains, “they’re also very intelligent and keen to learn. So they’re easy to train.” And that turned out to be true.

“Sarah got her puppy at the start of the summer holiday. “For two to three weeks, I could make the time to house-train Nouchka, because you have to do that. We chose a fixed place for him to wee, first indoors, without too much distraction. And I kept a close eye on him - which was a lot of fun! When he had to wee, I took him to the place. After he did his wee, I rewarded him with snack for puppies .

The house-training went very smoothly. Today Nouchka does her business by herself in the garden. “At the same time, I used a secret aid: Nouch used to wee - if all went well - on a training pad that doesn’t smell. And I also sprayed on a product that smells good to my precious. After that, I moved the training pad outside, little by little, until Nouch was weeing out there.”